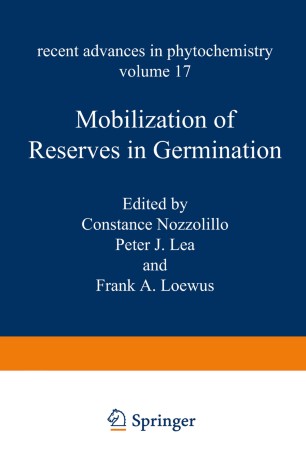 Mobilization of Reserves in Germination

Although many reviews and articles about germination have been published, our understanding of the process is far from complete. Some of the reactions involved in the transforma­ tions and translocation of reserve compounds and their final fate in the growing tissues was the subject of the annual symposium of the Phytochemical Society of North America which was held in August, 1982, on the campus of the University of Ottawa, Canada. A major emphasis was on low molecular weight compounds, amino acids and sugars, and the checks and balances operating as they are produced by hydrolysis in reserve tissues and transformed in the growing tissues. The critical role of membranes was given especial emphasis. The closing presentation was an anthropocentric review of the nutritional benefits accrued during germination, and provided a scientific basis for the inclusion of sprouted seedlings in the human diet. Dr. R. G. Fulcher introduced the symposium topic with an elegant histochemical study in which the site and nature of seed reserves were defined by means of the glowing colors of fluorescence microscopy. The symposium was organized by C. Nozzolillo with advice and assistance from fellow PSNA members S. A. Brown, J. T. Arnason, and A. Picman and a visiting scientist from Sweden, C. Liljenberg.