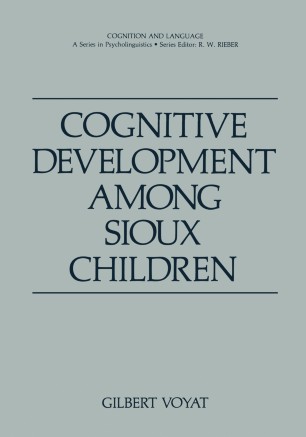 Part of the Cognition and Language book series (CALS)

been largely devoted to uncovering the fundamental processes which underlie our capacity to reason. Thus, his efforts have been aimed more at elucidating the very processes which are available to us and allow us to gain knowledge, than in quantifying the contextual knowl­ edge that we have gained. Thus, the methodology of the research we shall describe con­ trasts very much with the standard testing approach, because it is essentially exploratory rather than static, and allows us the essen­ tial flexibility demanded by work with different ethnic groups, per­ sonalities, or social environments. We have undertaken a develop­ mental study which seeks not to explore personality as a whole but rather the cognitive aspect of development, and in which we employ the Clinical Exploratory Method of Piaget. Thus, we shall focus mainly upon cognitive development and attempt to describe it in its normal socio-economic and ethnic environment. Practical Implications In Piaget's theory the child is actively involved in organizing his world of thought as he develops, and to understand this growing organization we must return to the child and examine the course of his thought through growth. He develops, for himself, his own cogni­ tive structures and since this process of development is not only external, but goes on internally as well, it seems reasonable to assume that logic viewed from this end is not biased as much by the cultural context in which it is examined. Perhaps some examples. at this point, could better express the idea.