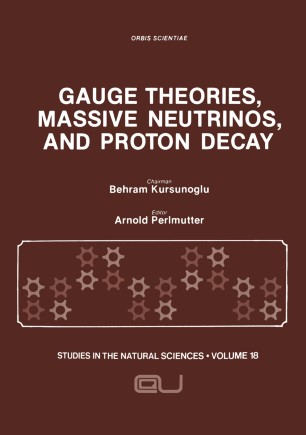 Part of the Studies in the Natural Sciences book series (SNS, volume 18)

The following proceedings contains most of the contributions given at Orbis Scientiae 1981. As has become customary during the past few years, the organizers and moderators have attempted to strike a balance between reviews of the status of experimental and theoretical developments during the preceding year. We are very pleased that experimentalists representing the critical developments in new accelerator plans, neutrino oscillations, proton decay, and decay schemes of the upsilon, have seen fit to enlighten at first hand their theoretical colleagues. We believe that this interaction can be of great benefit to both groups. The reports of theorists on many of the key theoretical advances by the practitioners themselves is a particularly satisfying feature of this series of conferences and is a tribute to the care and wisdom of the session moderators. Although it has not been a customary editorial practice, we feel that it is particularly appropriate to point out that the 1981 recipient of the J. Robert Oppenheimer Memorial Prize was Professor Frederick Reines, of University of California, Irvine, for his pioneering experiments which first experimentally estab­ lished the existence of the neutrino. The flurry of activit- experimental and theoretical - generated by recent evidence for massive neutrinos is amply reflected in the contents of this volume. The enthusiasm and skill of Mrs. Helga S. Billings and Mrs. Susan L. Maxon in the organization and the running of the con­ ference, as well as in the preparation of these proceedings, is gratefully acknowledged.