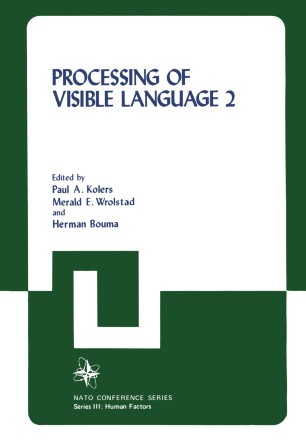 The second symposium on processing visible language constituted a different "mix" of participants from the first. Greater emphasis was given to the design of language, both in its historical development and in its current display; and to practical questions associated with machine-implementation oflanguage, in the interactions of person and computer, and in the characteristics of the physical and environmental objects that affect the interaction. Another change was that a special session on theory capped the proceedings. Psychologists remained heavily involved, however, both as contributors to and as discussants of the work pre­ sented. The motivation of the conferences remains one of bringing together graphic designers, engineers, and psychologists concerned with the display and acquisition of visible language. The papers separately tended to emphasize the one of the three disciplines that mark their authors' field of endeavor, but are constructed to be general rather than parochial. Moreover, within the three disciplines, papers emphasized either the textual or the more pictorial aspects. For example, a session on writing systems ranged from principles that seem to characterize all such systems to specific papers on ancient Egyptian writing, modern Korean, and English shorthand. The complementary session on the nontextual media opened with a discussion of general principles of pictorial communication and included papers on communicating instructions, general information, or religious belief through designs and other pictorial forms, as well as a discussion. of misrepresentation.