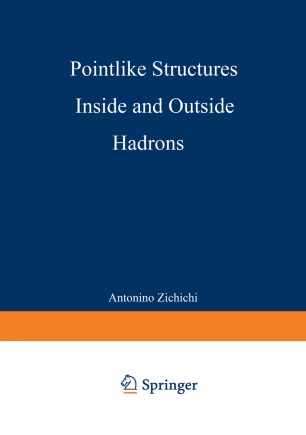 Pointlike Structures Inside and Outside Hadrons

Part of the The Subnuclear Series book series (SUS, volume 17)

In August 1979 a group of 94 physicists from 60 laboratories in 21 countries met in Erice to attend the 17th Course of the International School of Subnuclear Physics. The countries represented at the School were: Argentina, Australia, Austria, Belgium, Canada, Federal Republic of Germany, France, Hungary, India, Italy, Japan, Korea, the Netherlands, Nor­ way, Poland, Rumania, Spain, Sweden, the United Kingdom, the United States of America, and Yugoslavia. The School was sponsored by the Italian Ministry of Public Education (MPI), the Italian Ministry of Scientific and Techno­ logical Research (MRST) , the Sicilian Regional Government, and the Weizman Institute of Science. In the theoretical sessions, as expected, Sidney Coleman's (liN) lectures provided a new masterpiece in his Erice series. Andre Martin lectured on the theory of new particles, R.L. Jaffe on the Bag Hodel and Francis E. Low on quark status at low energy. In the more specialized section we were able to reflect on the problem of asymptotic changes in gauge theory, troubles experienced with instantons and finally on the fate of false vacua, thanks to A. Patrascioiu, R. Petronzio, and H. Kleinert. A quite exceptional event this year was the special QCD session wId_ch I leave the reader to enjoy without further introduction.