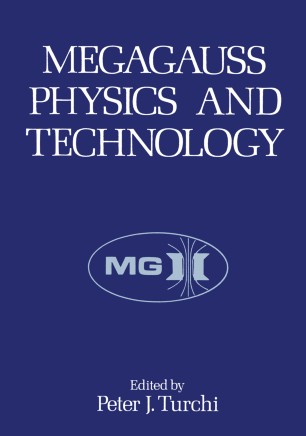 The generation and use of megagauss magnetic fields have been subjects of research and development in laboratories around the world for over a quarter of a century. Research goals have included the development of compact, short-pulse, electrical power sources and the production of ultrahigh magnetic field strengths over significant experimental volumes. Energies measured in megajoules, currents in megamperes and timescales of microseconds are not uncommon in such work. Phase changes, insulator breakdowns, and local des­ truction of the apparatus are also frequently encountered. Some efforts have involved the use of high explosive systems, developing methodologies rather distinct from those of a normal physics laboratory. Manipulation of magnetic flux to exchange energy between high speed, electrically conducting flows and high strength electromagnetic fields remains, of course, a basic interaction of classical physics. The remoteness of the necessary experimental sites (at least in many instances) and the various national concerns for security of defense-related research have often limited the flow of information between investigators of separate organizations, working in common areas of technical concern. Occa­ sionally, however, it has been possible for the community of scientists and engineers engaged in work on high magnetic fields and related high energy den­ sity systems to gather together and exchange results and plans, successes and failures. The first such international gathering was in 1965 at the Conference on Megagauss Magnetic Field Generation by Explosives and Related Experi­ ments, Frascati, Italy.