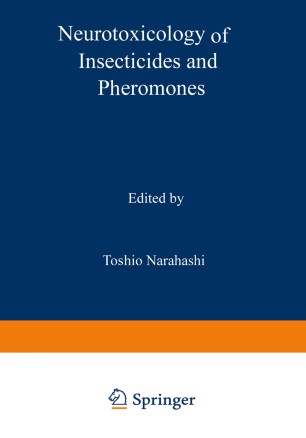 Neurotoxicology of Insecticides and Pheromones

Substantial progress has been made during the past three decades in the development of a variety of chemical means to control insect pests. A large number of highly effective insecticides have been developed, and many of them have contributed to a great extent to increasing agricultural productivity and eradicating diseases transmitted by vectors. However, contamination of our environment caused by various pesticides has become a serious problem, and various attempts have been made to develop newer methods of con­ trolling insect pests. One of the approaches is to develop newer insecticides which cause less contamination of the environment without losing their insecticidal potencies. Another approach, among other things, is to utilize pheromones to control certain species of insects. No matter what approach one may choose, it is imperative to understand the mechanism of action of pesticides for efficient development and utilization of these chemicals. One important feature common to most insecticides and pheromones is their inter­ action with the nervous system which is the main target site. Thus the mechanisms of action of these chemicals on the nervous system represent one of the most critical aspects in pesticide toxicology. In comparison to the chemical and biochemical studies dealing with the metabolism of various pesticides, the study of neurotoxicology has lagged behind to a considerable extent for various reasons. Technical complications involved in neuroto- co logical experiments appear to be one of the contributing factors.