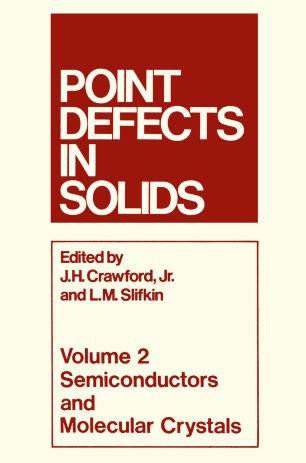 Volume 1 of Point Defects in Solids has as its major emphasis defects in ionic solids. Volume 2 now extends this emphasis to semiconductors. The first four chapters treat in some detail the creation, kinetic behavior, inter­ actions, and physical properties of both simple and composite defects in a variety of semiconducting systems. Also included, as in Vol. 1, are chapters on special topics, namely phonon-defect interactions and defects in organic crystals. Defect behavior in semiconductors has been a subject of considerable interest since the discovery some twenty-five years ago that fast neutron irradiation profoundly affected the electrical characteristics of germanium and silicon. Present-day interest has been stimulated by such semiconductor applications as solar cell power plants for space stations and satellites and semiconductor particle and y-ray detectors, since in both radiation damage can cause serious deterioration. Of even greater practical concern is the need to understand particle damage in order to capitalize upon the develop­ ing technique of ion implantation as a means of device fabrication. Although the periodic international conferences on radiation effects in semiconductors have served the valuable function of summarizing the extensive work being done in this field, these proceedings are much too detailed and lack the background discussion needed to make them useful to the novice.