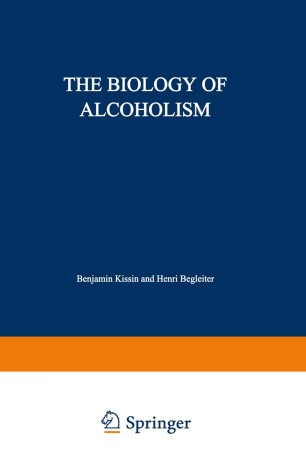 Alcoholism is a uniquely human condition. Although some forms of alcohol dependence can be induced experimentally in a variety of laboratory animals, the complete spectrum of alcoholism with all of its physical, psychological, and social implications occurs only in man. The special quality of this relationship becomes more significant when one considers that the manifestations of most physical disease syndromes in animals and man are more similar than they are different. The uniqueness of alcoholism lies in the fact that it is one of the few physical diseases which reflects at all levels the problems of individuals coping with the complexities of human society. In order to present a more coherent picture of these complex relationships, we have attempted to impose a logical sequence upon the material. This sequence lies along a dual parameter-from the physical to the social and from the theor­ etical to the empirical. Consequently, it was natural for the first volume in this series to deal with biochemistry, the most basic and physical aspect of the inter­ action of alcohol and man. It is equally natural for this, the second volume, to deal with physiology and behavior, for these levels of phenomenology-partic­ ularly the latter-are already more empirical and psychological in their mani­ festations. Finally, the third volume, clinical pathology, describes the disease itself, with all of the medical and social implications carried in the word "alcoholism.