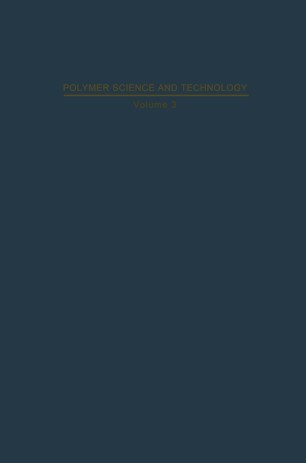 Part of the Polymer Science and Technology book series (volume 3)

The growing public concern about environmental matters has prompted widespread discussion in the media. Unfortunately much of this public debate has been characterized more by ardour than by information, and often the wildest speculations are pro­ mulgated with the same appearance of veracity as hard scientific facts. It is an important, and often neglected, duty of scientific societies to make sure that the public is properly informed regard­ ing the technical aspects of matters of public interest, and to assure that policy decisions of governmental and other agencies are made with due regard to the scientific and technical facts, so far as they are ascertainable. For a variety of reasons, not all of which are related to the magnitude of the problems, a great deal of public attention has been focused on the environmental aspect s of the chemical industry. Because of this the American Chemical Society has wisely decided to sponsor a number of symposia at national scientific meetings where these issues can be raised and information supplied regarding their technical and scientific aspects.