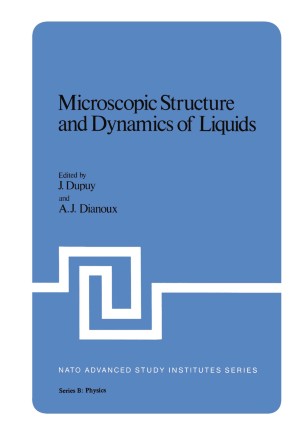 Microscopic Structure and Dynamics of Liquids

What did we have in mind when in May, 1976, we (Professor de Gennes, Dr. Tourand and ourselves) thought of a Summer School in the field of liquids? First, we wanted to present and discuss the new results that have been obtained recently, in particular at the high flux reactor of the Institut Laue-Langevin in Grenoble since it became operational in 1972. In order to achieve this goal, the major part of this Summer School was devoted to an ex­ tensive presentation of the gen~ra1 concepts and methods of study­ ing this state of matter (time-dependent correlation functions, molecular dynamics, intermolecular forces, spectroscopic tech­ niques ••• ) and concentrated on a few specific systems which have seen significant development in the last few years, both theoret­ ically and experimentally. These systems are the different classes of simple liquids: metallic liquids, ionic liquids, simple molecu­ lar liquids and the new field of superionic conductors (solid electrolytes). Furthermore, we wanted to put some emphasis on a particular research area in the field of liquids, namely critical phenomena in fluids. This was chosen both because of our personal interest in this field and the major theoretical advances which have occurred in the last ten years. We also wished that some new powerful techniques or new theo­ retical approaches be presented at this School. Thus, picosecond laser techniques, theoretical calculations on dipolar fluids, and angular correlations in molecular liquids were the subject of specific seminars.