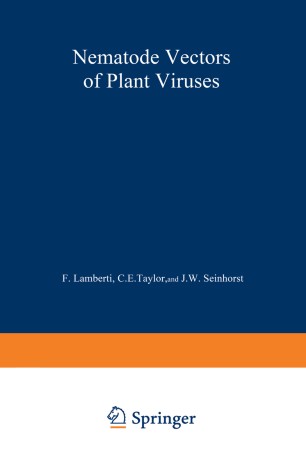 Although nematodes had long been suspected as vectors of soil­ borne plant diseases, unequivocal proof of their implication was not forthcoming until 1958 when Professor William Hewitt and his colleagues in California demonstrated experimentally that Xiphinema ~ was the vector of grapevine fanleaf virus. This opened up a new and exciting field in plant pathology and discoveries quickly followed of other nematode species associated with soil-borne diseases of many different crops and in several countries. After the initial enthusiasm of discovering new vectors and new viruses there followed a period of consolidation in which research workers sought answers to tantalising questions about the location of the virus within the nematode, the factors governing the close speci­ ficity between virus and vector; and more mundane but equally important and compelling questions about life cycles, geographical distribution, host relations, morphology and taxonomy. No other group of nematodes has attracted such a concentrated effort involv­ ing many different scientific specialisations and yielding so much progress in a relatively short time. The NATO Advanced Study Institute held at Riva dei Tessali, Italy, during 19 May to 2 June, 1974, provided the forum for a critical discussion of all aspects of biology of virus vector nema­ todes.