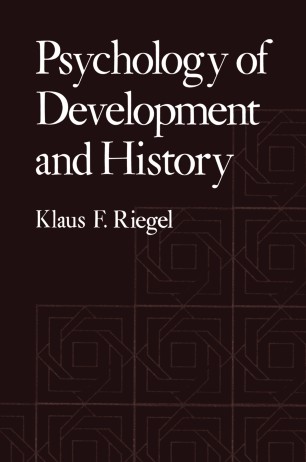 Psychology of Development and History

Part of the Perspectives in Developmental Psychology book series (PDPS)

This book documents my return to a topic that has always been one of my closest interests: the systematic study of intellectual and political history. I became involved in historical studies while in high school and continued this work during the years that I spent as a metalworker in a shipyard and in a factory. Indeed, I succeeded in being admitted to the University of Hamburg only after submitting a comparative analysis of the history of early Greek and early Western philosophy to the late Professor G. Ralfs. He gave me much encouragement and remained one of my main academic sponsors during the years in Hamburg. Recently, I translated into English the manuscript that had opened the doors of the university for me, and ex­ tended it to the history of psychology. The results present the unfolding of an intellectual theme as if it were an historical dialogue. They (chaps. 10 and 11) are, perhaps, controversial achievements, but they are among my proudest. Before I began my studies in psychology and philosophy, I spent al­ most two years in physics and mathematics. Subsequently, I began to approach psychology with a natural-science emphasis. Even when I began to shift my attention from general experimental to developmental psychol­ ogy (especially gerontology), I continued to maintain this orientation and deemphasized my historical interest. This interest did not find any reso­ nance in the developmental research and theory of these years anyhow.