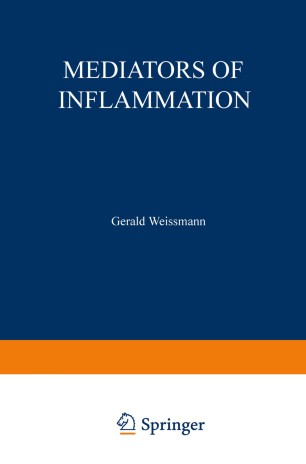 Lewis Thomas has suggested that "Perhaps the inflammatory reaction should be regarded as a defense of an individual against all the rest of nature, symbolizing his individuality and announcing his existence as an entity. " Provision of these symbols and announcements is the task of various mediators of inflammation and this volume has been designed to present our current understanding of their biochemistry, cellular origins, pharmacology, and role in pathology. Unlike other volumes of collected papers, this book did not result from a specific conference or symposium at which each contributor presented his own, narrowly framed research experience. Rather, each of the chapters represents, in the form of a general review, a summary of our knowledge of the mediators and the mecha­ nisms by which they are released to launch the inflammatory response. Much effort has been taken to insure that the often conflicting terminology in this field is defmed in detail: many synonyms (e. g. , of the properdin system or the alternate pathway of complement activation) have been repeatedly presented, in order to avoid confusion. Although each of the contributors is actively engaged in the field of inflammation, few text figures or tables of ongoing research have been included; the overall aim was to provide a volume readily accessible to workers in other areas as well as to the general reader.