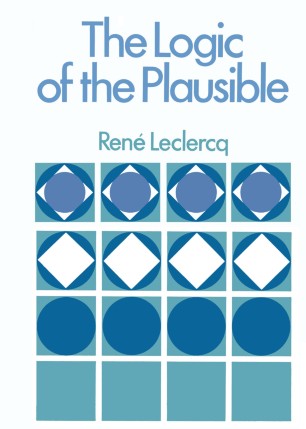 The Logic of the Plausible and Some of its Applications

So simple and imperfect as it may appear this book has made use of knowledge on invention and discovery accumu­ lated during a lifetime. Those persons who would be tempted to emphasize only its imperfections should read the correspondence exchanged between Cantor and Dedekind at the end of the nineteenth century; they would then realize how difficult it was, even for an outstanding man, the creator of the set theory, to propose impeccable results in a completely new field. The field I have chosen here is plausibility. I have proposed an intuitive, some would say a naive, presentation as I want to reach as large an audience as possible and because I personally believe that it is easier to axiomatize a mathematical theory precisely than to dis­ cover it and enunciate its key theorems. Professor Polya said: "The truly creative mathematician is a good guesser first and a good prover afterward. " For centuries a formalized generalized logic was found necessary and many attempts have been made to build it. vi Preface Mine is based on plausibility which covers with precision a wider field than probability and makes the formalization of analogy and generalization possible. As Laplace said: "Even in the mathematical sciences, our principal instru­ ments to discover the truth are induction and analogy. "* The examples of application I have chosen are not des­ cribed in detail.