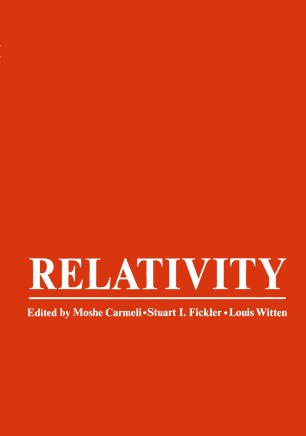 Proceedings of the Relativity Conference in the Midwest, held at Cincinnati, Ohio, June 2–6, 1969

The Relativity Conference in the Midwest was held in Cincin­ nati from June 2-6, 1969 and was sponsored jointly by the Aerospace Research Laboratories and the University of Cincinnati. During 1969, the Aerospace Research Laboratories celebrated the twentieth year of its existence and the University of Cincinnati celebrated its sesquicentennial year. Because of the extended interest of the Aerospace Research Laboratories in the Theory of Relativity and the recent arrival at the University of Cincinnati of one of the confer­ ence organizers it was felt that sponsoring a National Conference on Relativity designed primarily for participation by American scientists would represent a worthwhile contribution to the joint celebrations. This was the first formal national conference specifically devoted to relativity held in this country since the 1957 conference on The Role of Gravitation in Physics held in Chapel Hill. The format of the week-long conference consisted primarily of invited papers and extensive informal discussions. Contributed papers were generally discouraged except as their subject matter fit into the discussions. At no time was a clock used to terminate an invited talk; it was frequently necessary, however, to terminate the dis­ cussions after some hours because of the onset of weariness in mind and stomache. By general demand a special informal session was organized and held on Tuesday night to discuss "Superspace. " The Superspace Session started at 8:00 P. M. and faded away beginning at 2:00 A. ~L This volume contains a summary of most of the invited papers.