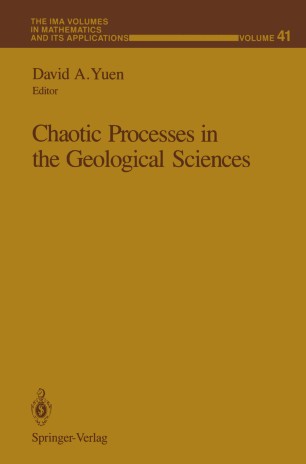 Chaotic Processes in the Geological Sciences

Part of the The IMA Volumes in Mathematics and its Applications book series (IMA, volume 41)

This IMA Volume in Mathematics and its Applications CHAOTIC PROCESSES IN THE GEOLOGICAL SCIENCES is based on the proceedings of a workshop which was an integral part of the 1989- 90 IMA program on "Dynamical Systems and their Applications". The workshop was intended to be an arena for scientific exchanges between earth scientists and mathematical researchers, especially with experts in dynamical systems. We thank Shui-Nee Chow, Martin Golubitsky, Richard McGehee, George R. Sell and David Yuen for organizing the meeting. We especially thank David Yuen for editing the proceedings. We also take this opportunity to thank those agencies whose financial support made the workshop possible: the Army Research Office, the Minnesota Supercomputer Institute, the National Science Foundation, and the Office of Naval Research. A vner Friedman Willard Miller, Jr. PREFACE The problems in geological sciences have many nonlinearities from the nature of the complicated physical laws which give rise to strongly chaotic behavior. Foremost and most visible are earthquakes and volcanic eruptions, more subtle are the time­ dependent variations of the Earth's magnetic fields and motions of the surface plates.