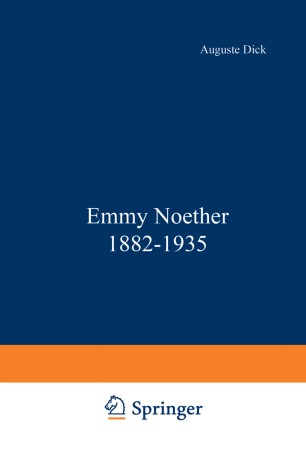 N 1964 at the World's Fair in New York I City one room was dedicated solely to mathematics. The display included a very at­ tractive and informative mural, about 13 feet long, sponsored by one of the largest com­ puter manufacturing companies and present­ ing a brief survey of the history of mathemat­ ics. Entitled, "Men of Modern Mathematics," it gives an outline of the development of that science from approximately 1000 B. C. to the year of the exhibition. The first centuries of this time span are illustrated by pictures from the history of art and, in particular, architec­ ture; the period since 1500 is illuminated by portraits of mathematicians, including brief descriptions of their lives and professional achievements. Close to eighty portraits are crowded into a space of about fourteen square feet; among them, only one is of a woman. Her face-mature, intelligent, neither pretty nor handsome-may suggest her love of sci- 1 Emmy Noether ence and creative gift, but certainly reveals a likeable personality and a genuine kindness of heart. It is the portrait of Emmy Noether ( 1882 - 1935), surrounded by the likenesses of such famous men as Joseph Liouville (1809-1882), Georg Cantor (1845-1918), and David Hilbert (1862 -1943). It is accom­ panied by the following text: Emmy Noether, daughter of the mathemati­ cian Max, was often called "Der Noether," as if she were a man.