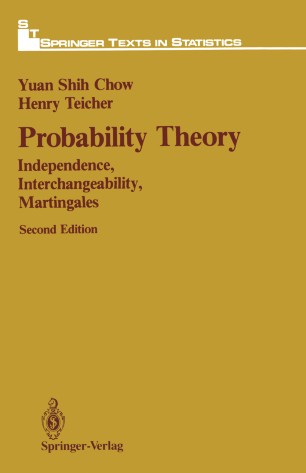 Apart from new examples and exercises, some simplifications of proofs, minor improvements, and correction of typographical errors, the principal change from the first edition is the addition of section 9.5, dealing with the central limit theorem for martingales and more general stochastic arrays. vii Preface to the First Edition Probability theory is a branch of mathematics dealing with chance phenomena and has clearly discernible links with the real world. The origins of the sub­ ject, generally attributed to investigations by the renowned French mathe­ matician Fermat of problems posed by a gambling contemporary to Pascal, have been pushed back a century earlier to the Italian mathematicians Cardano and Tartaglia about 1570 (Ore, 1953). Results as significant as the Bernoulli weak law of large numbers appeared as early as 1713, although its counterpart, the Borel strong law oflarge numbers, did not emerge until 1909. Central limit theorems and conditional probabilities were already being investigated in the eighteenth century, but the first serious attempts to grapple with the logical foundations of probability seem to be Keynes (1921), von Mises (1928; 1931), and Kolmogorov (1933).