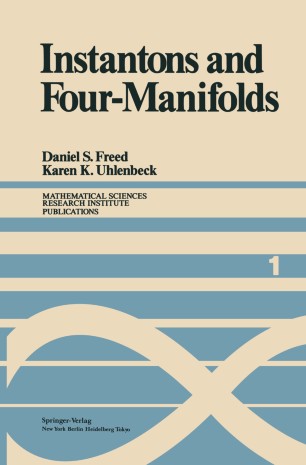 This book is the outcome of a seminar organized by Michael Freedman and Karen Uhlenbeck (the senior author) at the Mathematical Sciences Research Institute in Berkeley during its first few months of existence. Dan Freed (the junior author) was originally appointed as notetaker. The express purpose of the seminar was to go through a proof of Simon Donaldson's Theorem, which had been announced the previous spring. Donaldson proved the nonsmoothability of certain topological four-manifolds; a year earlier Freedman had constructed these manifolds as part of his solution to the four dimensional ; Poincare conjecture. The spectacular application of Donaldson's and Freedman's theorems to the existence of fake 1R4,s made headlines (insofar as mathematics ever makes headlines). Moreover, Donaldson proved his theorem in topology by studying the solution space of equations the Yang-Mills equations which come from ultra-modern physics. The philosophical implications are unavoidable: we mathematicians need physics! The seminar was initially very well attended. Unfortunately, we found after three months that we had covered most of the published material, but had made little real progress towards giving a complete, detailed proof. Mter joint work extending over three cities and 3000 miles, this book now provides such a proof. The seminar bogged down in the hard analysis (56 59), which also takes up most of Donaldson's paper (in less detail). As we proceeded it became clear to us that the techniques in partial differential equations used in the proof differ strikingly from the geometric and topological material.