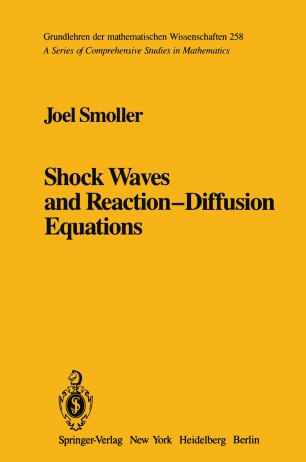 . . . the progress of physics will to a large extent depend on the progress of nonlinear mathe­ matics, of methods to solve nonlinear equations . . . and therefore we can learn by comparing different nonlinear problems. WERNER HEISENBERG I undertook to write this book for two reasons. First, I wanted to make easily available the basics of both the theory of hyperbolic conservation laws and the theory of systems of reaction-diffusion equations, including the generalized Morse theory as developed by C. Conley. These important subjects seem difficult to learn since the results are scattered throughout the research journals. 1 Second, I feel that there is a need to present the modern methods and ideas in these fields to a wider audience than just mathe­ maticians. Thus, the book has some rather sophisticated aspects to it, as well as certain textbook aspects. The latter serve to explain, somewhat, the reason that a book with the title Shock Waves and Reaction-Diffusion Equations has the first nine chapters devoted to linear partial differential equations. More precisely, I have found from my classroom experience that it is far easier to grasp the subtleties of nonlinear partial differential equations after one has an understanding of the basic notions in the linear theory. This book is divided into four main parts: linear theory, reaction­ diffusion equations, shock wave theory, and the Conley index, in that order. Thus, the text begins with a discussion of ill-posed problems.