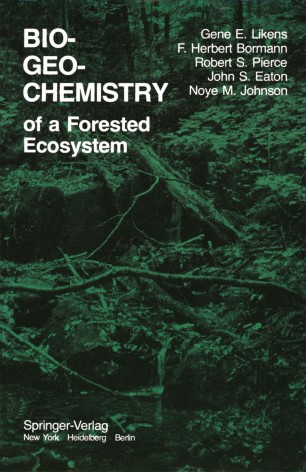 Biogeochemistry of a Forested Ecosystem

About 15 years ago we began the Hubbard Brook Ecosys­ tem Study with the development of an ecosystem model and the conception of a method whereby some major parameters of the model could be directly measured under field conditions. The method, called "the small watershed technique," allowed measurement of input and output of chemicals and the construction of ecosystem nutrient bud­ gets. Although the Hubbard Brook study of nutrient cycling originated with ideas developed by F. H. Bormann and G. E. Likens, its early growth was aided by the remaining authors of this volume-Robert Pierce, forest hydrologist; Noye Johnson, geochemist; and John Eaton, forest ecologist. Donald W. Fisher of the United States Geological Survey also cooperated in the early phases of the project and provided numerous data on the chemistry of precipitation and stream water. Particular credit is due the United States Forest Service, whose scientists chose the Hubbard Brook Valley as a hydrologic study site, selected particular watersheds for intensive measurement, carried out a variety of basic hydrologic studies, and in general cooperated with us in many ways to make the Hubbard Brook Ecosystem Study a reality. The initial part of the ecosystem study was concerned primarily with nutrient flux and cycling and it was done slowly and deliberately. The entire effort during the first few years of study was carried forward by three of us at vi Preface Dartmouth College with the cooperation of the United States Forest Service.