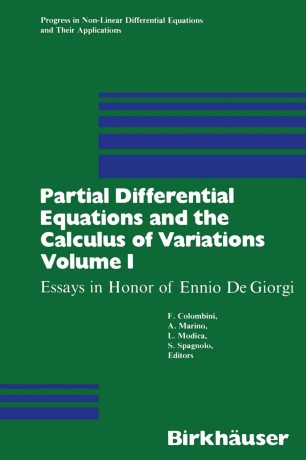 Partial Differential Equations and the Calculus of Variations

Part of the Progress in Nonlinear Differential Equations and Their Applications book series (PNLDE, volume 1)

The Italian school of Mathematical Analysis has long and glo­ rious traditions. In the last thirty years it owes very much to the scientific pre-eminence of Ennio De Giorgi, Professor of Mathemati­ cal Analysis at the Scuola Normale Superiore di Pisa. His fundamental theorems in Calculus of Variations, in Minimal Surfaces Theory, in Partial Differential Equations, in Axiomatic Set Theory as well as the fertility of his mind to discover both general mathematical structures and techniques which frame many different problems, and profound and meaningful examples which show the limits of a theory and give origin to new results and theories, makes him an absolute reference point for all Italian mathematicians, and a well-known and valued personage in the international mathematical world. We have been students of Ennio de Giorgi. Now, we are glad to present to him, together with all his collegues, friends and former students, these Essays of Mathematical Analysis written in his hon­ our on the occasion of his sixtieth birthday (February 8th, 1988), with our best wishes and our thanks for all he gave in the past and will give us in the future. We have added to the research papers of this book the text of a conversation with Ennio De Giorgi about the diffusion and the communication of science and, in particular, of Mathematics.