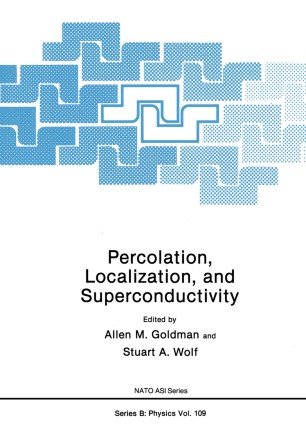 The study of the effects of dimensional ity and disorder on phase transitions, electronic transport, and superconductivity has become an important field of research in condensed matter physics. These effects are both classical and quantum mechanical in nature and are observed universally in urealu materials. What may at first glance seem a diverse collection of lectures which form the chapters of these proceedings is in fact, an attempt to demon­ strate the commonality, inter-relationship, and general applica­ bility of the phenomena of localization, percolation, and macro­ scopic quantum effects on electrical transport and superconduc­ tivity in disordered solids. The theory of these phenomena is presented in a complete, yet, self-contained fashion and the inter-relationship between the topics is emphasized. An extensive treatment of experimental results is also included, both those which have stimulated the theory as well as those that have confirmed it. Many of the phenomena investigated in this field also have technological significance. For example, the nature of electronic localization in metals in which one or more dimensions are con­ strained is very important when one attempts to predict the be­ havior of the metallic interconnects in ultra-miniature circuits.