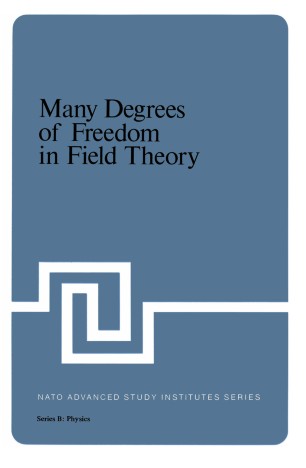 Many Degrees of Freedom in Field Theory

Volumes 30 and 31 of this series, dealing with "Many Degrees of Freedom," contain the proceedings of the 1976 International Summer Institute of Theoretical Physics, held at the university of Bielefeld from August 23 to September 4, 1976. This institute was the eighth in a series of summer schools devoted to particle physics and organized by universities and research institutes in the Federal Republic of Germany. Many degrees of freedom and collective phenomena play a critical role in the description and understanding of elementary particles. The lectures in this volume were intended to display how these structures occur in various recent developments of mathematical physics. Lectures ranged from classical nonlinear field theory over classical soliton models, constructive quantum field theory with soliton solutions and gauge models to the recent unified description of renormalization group tech­ niques in probabilistic language and to quantum statisti­ cal dynamics in terms of derivations. The Institute took place at the Center for Inter­ disciplinary Research of the University of Bielefeld. On behalf of all participants, it is a pleasure to thank the officials and the administration of the Center for their cooperation and help before and during the Insti­ tute. Special thanks go to V.C. Fulland, M. Kamper, and A. Kottenkamp for their rapid and competent preparation of the manuscripts.