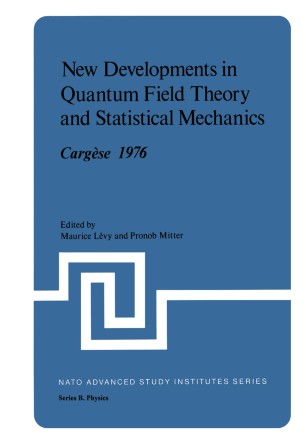 The 1976 Cargese Summer Institute was devoted to the study of certain exciting developments in quantum field theory and critical phenomena. Its genesis occurred in 1974 as an outgrowth of many scientific discussions amongst the undersigned, who decided to form a scientific committee for the organization of the school. On the one hand, various workers in quantum field theory were continuing to make startling progress in different directions. On the other hand, many new problems were arising from these various domains. Thus we feIt that 1976 might be an appropriate occasion both to review recent developments and to encourage interactions between researchers from different backgrounds working on a common set of unsolved problems. An important aspect of the school, as it took place, was the participation of and stimulating interaction between such a broad spectrum of theorists. The central topics of the school were chosen from the areas of solitons, phase transitions, critical behavior, the renormalization group, gauge fields and the analysis of nonrenormalizable field theories. A noteworthy feature of these topics is the interpene­ tration of ideas from quantum field theory and statistical mechanics whose inherent unity is seen in the functional integral formulation of quantum field theory. The actual lectures were partly in the form of tutorials designed to familiarize the participants with re­ cent progress on the main topics of the school. Others were in the form of more specialized seminars reporting on recent research.