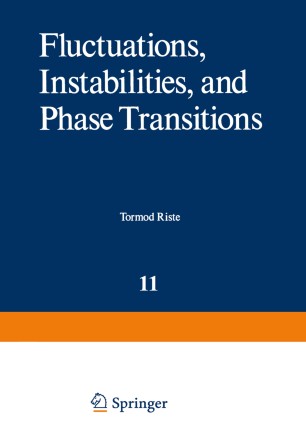 This book contains the papers presented at the NATO Advanced Study Institute held at Geilo, Norway, 11th - 20th April 1975. The institute was the third in a row devoted to phase transitions. The previous two dealt with 2nd- and 1st-order transitions in equilibrium systems and the proceedings have been published.i~ In order to make an overlap wi th those institutes, the first part of this institute was devoted to 1st -or der transitions with an emphasis on the problems of metast abi l i t y and instability en­ countered i n spinodal decomposition, nucleation etc. The main topic was, however, that of non-equilibrium systems, and the present institute was to our knowledge the first one devoted to the physics of such systems. The discovery of the analogy between phase transitions in equilibrium systems and instabilities in non-equilibrium systems was first made by Rolf Landauer in 1961 and later independently by others. The analogy was first pointed out for electronic devices (tunnel diodes, Gunn oscillators, lasers, etc. ) and the treatment of hydrodynamic instabilities followed later.