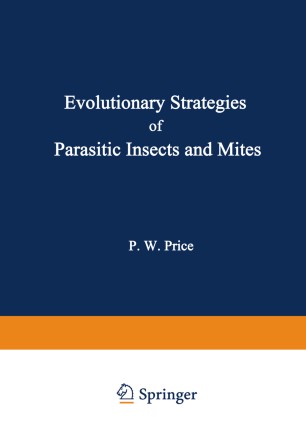 This volume contains the invited lectures presented in a symposium entitled "Evolutionary strategies of parasitic insects and mites" at the national meeting of the Entomological Society of America in Minneapolis, Minnesota, 2-5 December, 1974. The intent was to bring together biologists who have worked on arthropods that are either plant or animal parasites in order to foster consideration of general aspects of the parasitic way of life. There seems to be a deficiency of ecological and evolutionary concepts relating to parasitism, in contrast to the burgeoning literature on predation, and it appeared that an amalgamation of studies on plant and animal parasites might help development of some generalities. Since parasities are far more numerous than predators in the world fauna, or in any particular community, emphasis on their study is justified. I freely admit that para­ sitoids have been usefully regarded as predators by ecologists, and many concepts on predation have been derived from their study. Also, in whichever category one places the parasitoids, that is the one which contains the most species. However, from an evolu­ tionary point of view they show many characteristics that must be regarded as those of a parasite. Notably, they are small, highly specific to their host, highly coevolved with it, as a result many species can coexist, and their adaptive radiation has produced the majority of the species diversity seen on Earth today.