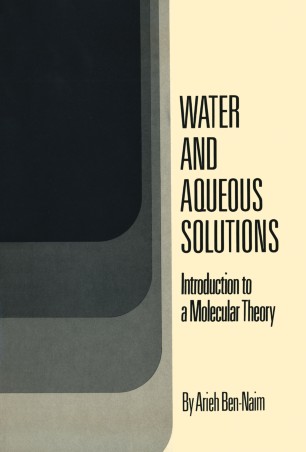 Introduction to a Molecular Theory

The molecular theory of water and aqueous solutions has only recently emerged as a new entity of research, although its roots may be found in age-old works. The purpose of this book is to present the molecular theory of aqueous fluids based on the framework of the general theory of liquids. The style of the book is introductory in character, but the reader is presumed to be familiar with the basic properties of water [for instance, the topics reviewed by Eisenberg and Kauzmann (1969)] and the elements of classical thermodynamics and statistical mechanics [e.g., Denbigh (1966), Hill (1960)] and to have some elementary knowledge of probability [e.g., Feller (1960), Papoulis (1965)]. No other familiarity with the molecular theory of liquids is presumed. For the convenience of the reader, we present in Chapter 1 the rudi­ ments of statistical mechanics that are required as prerequisites to an under­ standing of subsequent chapters. This chapter contains a brief and concise survey of topics which may be adopted by the reader as the fundamental "rules of the game," and from here on, the development is very slow and detailed.