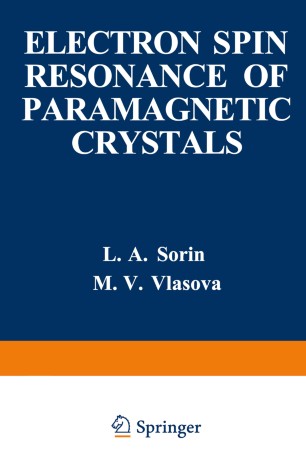 The authors of this contribution to the literature of resonance spectroscopy in paramagnetic systems are primarily concerned with the properties of the rare earth ions and, as such, the formal derivation of crystal field theory is set out in a manner which reflects this dominant interest. The ions of the 3d transition group are perhaps given too cursory a treatment in Chapter Two for those students of RF spectroscopy who have a somewhat less rare-earth oriented interest in the subject. Since the exam­ ples cited in the text do include some 3d transition ions, it is perhaps worthwhile in a preface of this sort to extend the broad theoretical concepts and group characteriza­ tion of Chapter Two to cover, in a somewhat more detailed manner, the derivation of the spin-Hamiltonian for this case. In Chapter Two, mention is made of the fact that for the 4f rare earth ions the spin­ orbit coupling energy is in general large compared to the crystal field influence of the surrounding ligand matrix. In such a case, the quantum number J is a good quantum number for the rare earth ion in question and the crystal field effects are taken into account within 1M, states. In this formulation, which is pursued in detail in this book, the effects of spin-orbit coupling have been taken care of at the very outset by the d~"ining of the 1M, states.