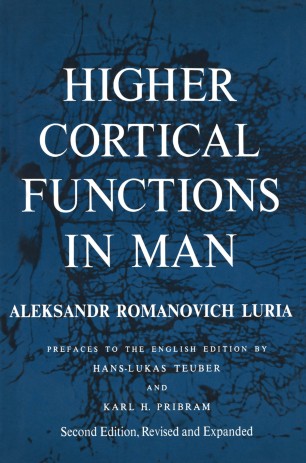 This full-length translation of Professor Luria's book introduces to the English­ speaking world a major document in neuropsychology, summarizing Professor Luria's earlier contributions to that area for nearly a third of a century. It is a monumental contribution. Nothing of this scope exists in the Western literature of this field, with the possible exception of Ajuriaguerra and Hecaen's book (in French) on the cerebral cortex. Professor Luria's book thus marks a further and decisive step toward the eventual coalescence of neurology and psychology, a goal to which only a few laboratories in the East and West have been devoted over the last decades. The book is unique in its organization. The first half deals with observations and interpretations concerning the major syndromes of man's left cerebral hemisphere: those grievous distortions of higher functions traditionally described as aphasia, agnosia, and apraxia. There is also a detailed and brilliant analysis of the syndrome of massive frontal-lobe involvement. The entire second half of the book is given over to a painstaking description of Professor Luria's tests, many of them introduced by himself, and set out in such detail that anyone could repeat them and thus verify Professor Luria's interpretations.