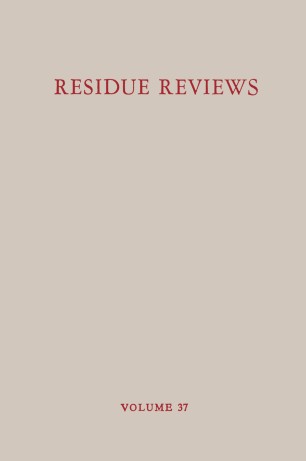 More and more biologists, chemists, pharmacologists, toxicologists, gov­ ernmental agencies, and "food control" (regulatory) ofncials around the world are nnding it increasingly difncult to keep abreast of the technical literature in the pesticide neid; indeed, many libraries do not have even a small proportion of the journals and other sources that now regularly contain research, development, and application information ab out all aspects of modern chemical pest control. As a result, a very large number of requests has come to "Residue Reviews" to publish detailed digests of information on single pesticide chemicals so that the interested person in any part of the world could easily be brought up to date with all available important in­ formation without having to search probably several hundred literature sources, many of them obscure or simply not available except in very large libraries. The service and convenience rendered the readership by such a series of volumes on major individual pesticide chemicals would therefore be considerable. Type and scope of coverage in this series of single-pesticide volumes will oE course vary with available information. The coverage should be as com­ plete as possible, however, to be of maximum value to all interested indi­ vi duals, industries, research institutions, and governmental agencies con­ cerned with the continuing production of an adequately large yet safe food supply for the world. Among the topics bracketed for a single pesticide should ideally be: I. Introduction 11.