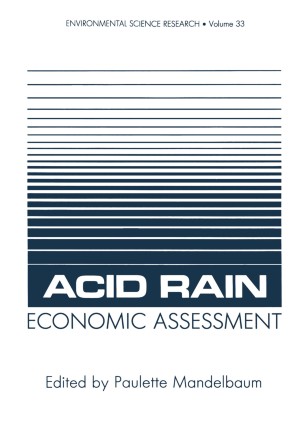 This volume, Proceedings of the Conference ACID RAIN: Economic Assessment, is meant to present the areas of agreement which economists have established and the uncertainties which they have discovered in their attempts to use the methodology of economics to better understand the nature of the acid rain issue. Scientific articles about acid rain initially appeared in 1972. The public turned its attention to the issue in the mid-1970s. In April 1979, the first acid rain bill was introduced in the Senate, authored by New York's Senator Daniel P. Moynihan. The bill sought to establish a federal research program dedicated to filling the gaps in understanding of the phenomena of long-range transport of air pollutants and their environmental, health and economic impacts. 'The bill was passed into law in 1980. Since then, tens of bills have been proposed to control emissions of S02 and NO , x thought to be the precursors of acid rain. And yet, in contrast with the pattern set by the majority of environmental issues, where legislation followed very quickly on the heels of public anxiety and involvement, by July 1985 not a single federal acid rain control bill had been passed.