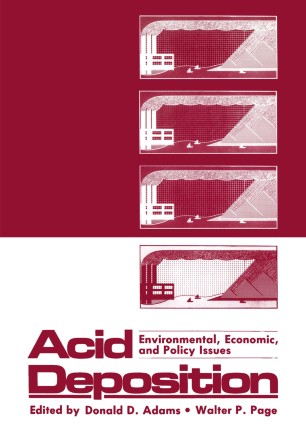 Concern about acid deposition, commonly referred to as acid rain, as a widespread pollution problem with severe ecological consequences has heightened public awareness. Many authorities fear that acid deposition may be the worst environmental crisis of our industrialized society because of both the global implications and possible widespread, irreversible damage to lakes, soils, and forested ecosystems. Neither state nor international boundaries are exempt from the transport and deposition of airborne pollutants resulting from local and distant emission sources. The dilemma and debate will continue as long as society requires fossil fuels for its energy needs without regard to emission constraints. This book started as a modest attempt to provide a status report on atmospheric transport, the chemical processes which produce acidifying agents, and resultant ecological and economic consequences. The materials in this book have been substantially revised from those presented at the conference in 1983. It became obvious that additional chapters were required when sudden and profound changes occurring in European forests were reported. It is felt that perhaps such damages could be an early warning to forested ecosystems in the northeastern United States and Canada as well as other places throughout the world. Most importantly, it is essential that gained scientific knowledge be translated into required legislation - a section on Policy Issues was incorporated to address these concerns. It is hoped that the reader will become informed and concerned enough to be involved in ll this IIglobal debate. Donald D. Adams Halter P.