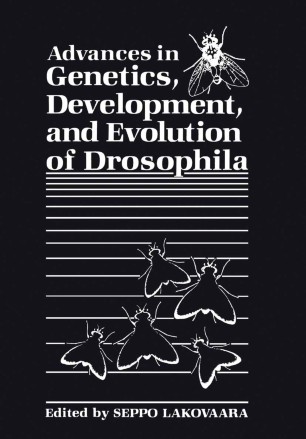 Advances in Genetics, Development, and Evolution of Drosophila

In 1906 Castle, Carpenter, Clarke, Mast, and Barrows published a paper entitled "The effects of inbreeding, cross-breeding, and selection upon the fertility and variability of Drosophila." This article, 55 pages long and published in the Proceedings of the Amer­ ican Academy, described experiments performed with Drosophila ampe­ lophila Lov, "a small dipterous insect known under various popular names such as the little fruit fly, pomace fly, vinegar fly, wine fly, and pickled fruit fly." This study, which was begun in 1901 and published in 1906, was the first published experimental study using Drosophila, subsequently known as Drosophila melanogaster Meigen. Of course, Drosophila was known before the experiments of Cas­ tles's group. The small flies swarming around grapes and wine pots have surely been known as long as wine has been produced. The honor of what was the first known misclassification of the fruit flies goes to Fabricius who named them Musca funebris in 1787. It was the Swedish dipterist, C.F. Fallen, who in 1823 changed the name of ~ funebris to Drosophila funebris which was heralding the beginning of the genus Drosophila. Present-day Drosophila research was started just 80 years ago and first published only 75 years ago. Even though the history of Drosophila research is short, the impact and volume of study on Drosophila has been tremendous during the last decades.