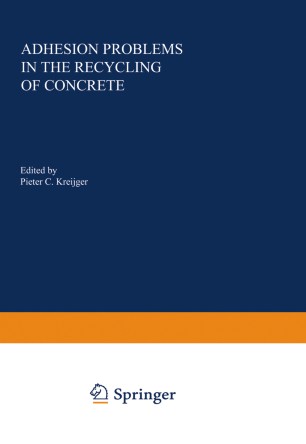 Adhesion Problems in the Recycling of Concrete

The building explosion during the years 1945-1960 will inevitably lead to increased demolition in the next decades since the lifetime distribution of structures no longer fulfills its functional social requirements in an acceptable way. In the building period mentioned there was a great increase in reinforced and prestressed concrete construction. Consequently there is now more and more concrete to be demolished. Increasingly severe demands will be made upon demolition technology, including the demand for human- and environment-friendly techniques. On the other hand, the possibility of disposing of debris by dumping is steadily diminishing, especially close to major cities and generally in countries with a high population density. At the same time in such countries and in such urban areas a shortage of aggregates for making concrete will develop as a result of restrictions on aggregate working because of its effect on the environment and because of the unavailability of aggregate deposits due to urban development. From the foregoing it follows that recycling and re-use of environment- and human-friendly demolished and fragmented building rubble should be considered. The translation of this general problem into terms of materials science is possible by forming clear ideas of adhesion and cohesion: the whole process of demolition, fragmentation, and recycling or re-use of concrete is to break the bonding forces between atoms and molecules and to form new bonds across the interfaces of various particles of either the same nature or a different nature.