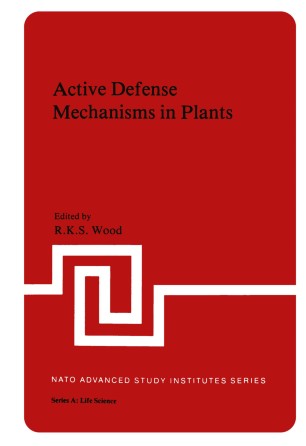 A NATO Advanced Study Institute on "Active Defence Mechanisms in Plants" was held at Cape Sounion, Greece, 21 April - 3 May 1981. It succeeded a similar Institute held at Porte Conte, Sardinia in 1975 on "Specificity in Plant Diseases. " What are active defence mechanisms in the context of plant disease in which a plant, the host, may be damaged by a pathogen? Defence mechanisms comprise properties of the host that decrease this damage. The mechanisms are passive when they are independent of the pathogen. They are active when they follow changes in the host caused by the pathogen. Thus for a fungal pathogen, cell walls of a higher plant which are lignified before infection would be a passive defence mechanism if they decreased damage by impeding growth of the fungus. Cell walls known to become lignified as a response to the pathogen would be an active defence mechanism if it were established that this response decreased damage. The papers and discussions at this Advanced Study Institute were about active defence mechanisms in higher plants, mainly econo­ mically important crop plants, against fungi, bacteria and viruses as pathogens. Taking the microorganisms first it is a truism but one that bears repeating that although plants almost always grow in close association with a wide variety of fungi and bacteria, often of types that can be pathogens, they rarely become diseased, at least not sufficiently so as to attract notice.