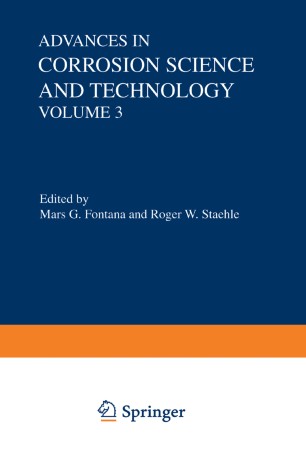 Part of the Advances in Corrosion Science and Technology book series (ACORRST, volume 3)

This series was organized to provide a forum for review papers in the area of corrosion. The aim of these reviews is to bring certain areas of corrosion science and technology into a sharp focus. The volumes of this series are published approximately on a yearly basis and each contains three to five reviews. The articles in each volume are sekcted in such a way as to be of interest both to the corrosion scientists and the corrosion technologists. There is, in fact, a particular aim in juxtaposing these interests because of the importance of mutual interaction and interdisciplinarity so important in corrosion studies. It is hoped that the corrosion scientists in this way may stay abreast of the activities in corrosion technology and vice versa. In this series the term "corrosion" is used in its very broadest sense. It includes, therefore, not only the degradation of metals in aqueous en­ vironment but also what is commonly referred to as "high-temperature oxidation. " Further, the plan is to be even more general than these topics; the series will include all solids and all environments. Today, engineering solids include not only metals but glasses, ionic solids, polymeric solids, and composites of these. Environments of interest must be extended to liquid metals, a wide variety of gases, nonaqueous electrolytes, and other non­ aqueous liquids.