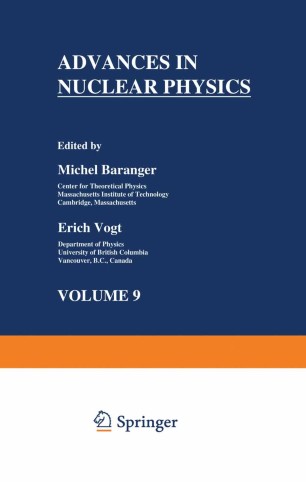 The three articles of the present volume clearly exhibit a wide scope of articles, which is the aim of this series. The article by Kahana and Baltz lies in the main flow of the large stream of work currently in progress with heavy-ion accelerators. A related article by Terry Fortune on "Multinuclear Transfer Reactions with Heavy Ions" is scheduled to appear in the next volume. The article by Whitehead, Watt, Cole, and Morrison pertains to the nuclear-shell model for which a number of articles have appeared in our series. Our very first volume had an article on how SU(3) techniques can, with great elegance, enable one to cope with the sizable number of states within a configuration. But the actual nuclear force is not exactly that yielded by the elegant techniques, and so interest continued in dealing with the large number of states by brute force. Then the Glasgow school of Whitehead et al. discovered that mathematical techniques existed for coping more simply with the lowest eigenvalues of large matrices. The present ar­ ticle aims generally to make accessible to nuclear physicists the methods developed at Glasgow. The final article by Baer, Crowe, and Truol on radiative pion capture describes a new field of importance because of the advent of the meson factories. More and more pions and muons will become standard tools in nuclear physics.