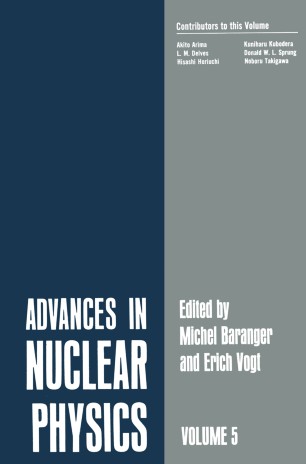 In both the present volume of Advances in Nuclear Physics and in the next volume, which will follow in a few months' time, we have stretched our normal pattern of reviews by including articles of more major proportions than any we have published before. As a result we have only three review articles in Volume 5. From the beginning of this series it has been our aim, as editors, to achieve variation in the scope, style, and length of individual articles sufficient to match the needs of the individual topic, rather than to restrain authors within rigid limits. It has not been our experience that this flexibility has led to unnecessary exuberance on the part of the authors. We feel that the major articles now entering the series are entirely justified. The article by Professor Delves on "Variational Techniques in the Nuclear Three-Body Problem" is an authoritative, definitive article on a subject which forms a cornerstone of nuclear physics. If we start with two­ body interactions, then the three-nucleon system is, perhaps, the only many­ nucleon system whose exact description may lie within the scope of human ingenuity. In recent years some new techniques of scattering theory, origi­ nating mostly in particle physics, have led to a great deal of new interest in the nuclear three-body problem. In this series we have had two articles (by Mitra and by Duck) on the new approaches.