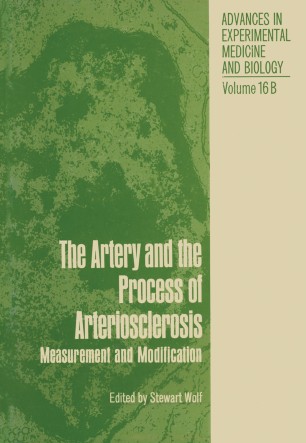 The Artery and the Process of Arteriosclerosis

Part of the Advances in Experimental Medicine and Biology book series (AEMB, volume 16B)

Substantial progress toward reconciling disparate theories of the pathogenesis of arteriosclerosis was recorded in Volume I of this book. the proceedings of an interdisciplinary workshop conference held at Lindau. Germany, April 19-25, 1970. Strong evidence was ad­ duced that the early stages of arteriosclerosis consist of intimal proliferation similar to that associated with the increase in arteri­ al size and caliber that characterizes normal growth. The findings described recall a theory proposed by Richard Thoma (Thoma and Kaefer, 1889) of Heidelberg toward the end of the nineteenth century. He sug­ gested that the pathogenesis of arteriosclerosis began with intimal thickening that was initially adaptive. Past a certain point, how­ ever, the thickening compromised the nutrition of the artery wall, leading inevitably to degenerative changes. In 1944 Hueper (Hueper, 1944), reemphasized the threat to the nu­ tritional support of the artery and proposed that the many etiologic factors capable of inducing arterial atheroma did so through the final common pathway of interfering with oxidative mechanisms in the vessel wall. Thus, it is proposed that arteriosclerosis is basically an aspect of the "behavior" of the artery. The nature of the lesion, therefore, depends more on the biochemical and structural response capabilities of the tissue itself than on the characteristics of the various etiologic agents. The idea that arteriosclerosis begins as uncontrolled or disturbed adaptive behavior was shared by Duff and also by Winternitz (Duff, 1954; Winternitz, 1954).