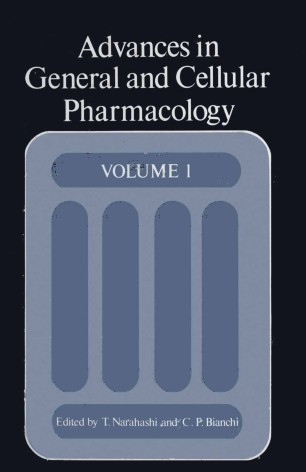 Advances in General and Cellular Pharmacology

Knowledge of the mechanism of action of drugs at cellular, subcellular, or molecular levels is of vital importance not only in giving the basis of inter­ pretation of the systemic action of drugs but also in improving existing drugs; in designing new forms of drugs; and in giving the basis of therapeutic applications. Classical pharmacology, concerning the action of drugs at integrated levels, does not necessarily give sufficient information as to the mechanism of action of drugs. A variety of sophisticated concepts utilizing the methods of physics, chemistry, biophysics, biochemistry, and physiology must be synthesized to understand the mechanism of action. Only since the last decade, however, have these techniques been fully applied to pharma­ cological investigations. It is of utmost importance to realize that a new dimension of pharmacological research has indeed emerged as a result of such a multidisciplinary approach; this approach is encompassed in general and cellular pharmacology. Such recent studies of drug actions have led to a number of important findings. Certain chemicals and drugs were found to possess highly specific actions on cellular functions, so that they are widely being used as powerful tools for the study of a variety of physiological and pharmacological prob­ lems. Our knowledge of the cellular mechanisms of drug action has provided the basis for interpreting the systemic effects of the drugs and insight into the molecular mechanism involved.