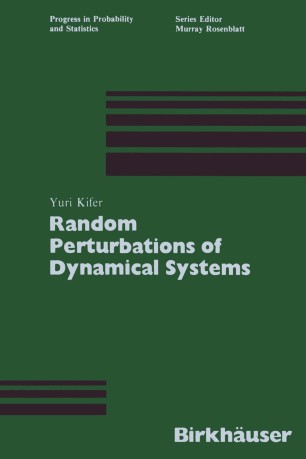 Part of the Progress in Probability and Statistics book series (PRPR, volume 16)

Mathematicians often face the question to which extent mathematical models describe processes of the real world. These models are derived from experimental data, hence they describe real phenomena only approximately. Thus a mathematical approach must begin with choosing properties which are not very sensitive to small changes in the model, and so may be viewed as properties of the real process. In particular, this concerns real processes which can be described by means of ordinary differential equations. By this reason different notions of stability played an important role in the qualitative theory of ordinary differential equations commonly known nowdays as the theory of dynamical systems. Since physical processes are usually affected by an enormous number of small external fluctuations whose resulting action would be natural to consider as random, the stability of dynamical systems with respect to random perturbations comes into the picture. There are differences between the study of stability properties of single trajectories, i. e. , the Lyapunov stability, and the global stability of dynamical systems. The stochastic Lyapunov stability was dealt with in Hasminskii [Has]. In this book we are concerned mainly with questions of global stability in the presence of noise which can be described as recovering parameters of dynamical systems from the study of their random perturbations. The parameters which is possible to obtain in this way can be considered as stable under random perturbations, and so having physical sense. -1- Our set up is the following.