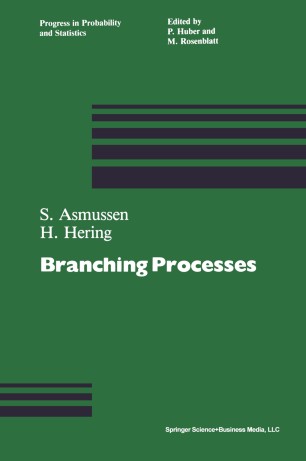 Part of the Progress in Probability and Statistics book series (PRPR, volume 3)

Branching processes form one of the classical fields of applied probability and are still an active area of research. The field has by now grown so large and diverse that a complete and unified treat­ ment is hardly possible anymore, let alone in one volume. So, our aim here has been to single out some of the more recent developments and to present them with sufficient background material to obtain a largely self-contained treatment intended to supplement previous mo­ nographs rather than to overlap them. The body of the text is divided into four parts, each of its own flavor. Part A is a short introduction, stressing examples and applications. In Part B we give a self-contained and up-to-date pre­ sentation of the classical limit theory of simple branching processes, viz. the Gal ton-Watson ( Bienayme-G-W) process and i ts continuous time analogue. Part C deals with the limit theory of Il!arkov branching processes with a general set of types under conditions tailored to (multigroup) branching diffusions on bounded domains, a setting which also covers the ordinary multitype case. Whereas the point of view in Parts A and B is quite pedagogical, the aim of Part C is to treat a large subfield to the highest degree of generality and completeness possi"ble. Thus the exposition there is at times quite technical.