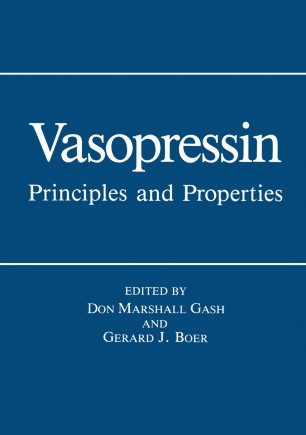 The concept for Vasopressin: Principles and Properties originated during the sum­ mer of 1983. From reviewing the rich and diverse literature on vasopressin, it became evident that the rapid advancements in this field made it difficult to syn­ thesize the information gathered from divergent scientific disciplines into a coherent view of the biological role of vasopressin. We perceived the need for a series of critical reviews delineating this recent progress. Over the past decade, major advances have been made in studies of the anatomy, physiology, phar­ macology, molecular biology, and behavioral activities of vasopressin. This is, in no small measure, due to the finding that vasopressin can no longer be regarded solely as a neurohypophysial hormone. Our present knowledge is that vasopressin is synthesized in also has an axonal messenger role in the nervous system and of the brain, although the functions of vasopressin in these periph­ sites outside of vasopressin eral sites are not well understood. In order to prepare an overview concentrating on recent studies in vertebrates, authors were selected based on their expertise and asked to review their research area, including the work from other laboratories. It was our intent to provide an updated definitive reference which would complement and extend such past texts as Neurohypophysial Hor­ mones and Similar Polypeptides (Handbook of Experimental Pharmacology, Vol­ ume XXIII, 1968) and The Pituitary Gland and Its Neuroendocrine Control (Handbook of Physiology, Section 7: Volume IV, 1974).