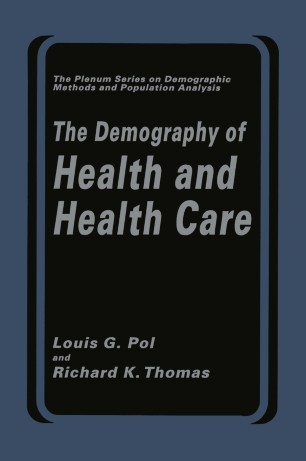 The Demography of Health and Health Care

The 1980s witnessed the emergence of an applied subdiscipline within de­ mography that is coming to be termed health demography. As yet there is no distinct body of research formally categorized under this heading, nor are there professionals who bear the title of health demographer. In fact, most of those involved with health demography are not demographers but sociologists, economists, epidemiologists, and others who are applying concepts and tech­ niques from demography to concrete problems in the delivery of health care. Nevertheless, the vague boundaries of this subdiscipline are becoming in­ creasingly visible, and the 1990s promise to be the era of health demography. Many factors have contributed to the emergence of this new field. The transition the health care industry underwent during the 1980s served to modify dramatically the mindset of those in health care from one based on a philanthropic orientation to a highly competitive business orientation. Al­ most overnight the industry became market driven and consumer oriented, resulting in an explosion in the demand for both demographic data and health statistics. The need to integrate and interpret data from these two fields has provided a major impetus for the development of health demography. At the same time, the redefining of health and illness along lines more in keeping with a social than a clinical perspective, and the reconceptualization of etiology within a lifestyles framework, have further emphasized the need for health demography.