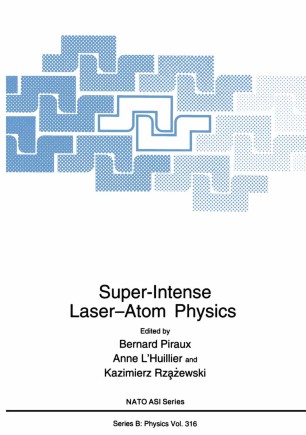 The rapid development of powerful pulsed lasers is at the origin of a conside­ rable interest in studying the response of an atom, a molecule (or a solid) to a strong electromagnetic field. It is now possible to produce at the laboratory scale, ultra-short 13 pulses with a duration of 100 femtoseconds (10- second) and a power of the order 12 of 1 terawatt (10 Watt). Under these conditions, very high peak intensities may be obtained and electric fields exceeding typical electron binding fields in atoms are generated. The interaction of an atom or a molecule with such electromagnetic fields has a highly non-linear character which leads to unexpected phenomena. Amongst them, - above-threshold ionization (ATI) i.e. the absorption of additional photons in excess of the minimal number necessary to overcome the ionization potential and its molecular counterpart, above-threshold dissociation (ATD); - generation of very high harmonics of the driving field; - stabilization of one-electron systems in strong fields. These processes were the main topics of two international meetings which were held in 1989 and 1991 in the United States under the common name SILAP (Super-Intense Laser-Atom Physics).