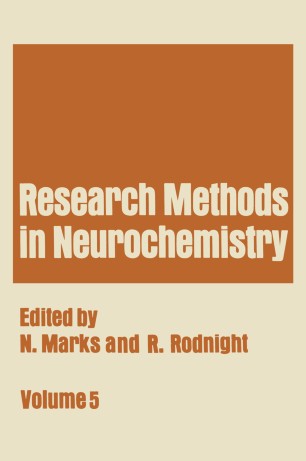 This fifth volume of Research Methods in Neurochemistry represents a milestone in that it marks almost a decade since the inception of the series. Over these ten years there has been an almost exponential growth in neuro­ chemistry accompanied by numerous technical developments. This is the justification for our series; inevitably we have only been able to cover a frac­ tion of the methodological innovations of the last decade, but we have tried as much as possible to create a balance between the different approaches and philosophies in the study of the chemical basis of brain function. Thus our original format of grouping chapters under various headings-for instance, studies in intact tissues as distinct from studies describing constituents and isolated enzymes-appears to be justified. Studies on whole animals or tissues retaining cellular organization are vital in providing insights into the neurochemical mechanism underlying functional processes; at the same time, the eventual understanding of function can only be attained on the basis of knowledge of the molecular architecture of the tissue. In the present volume, Oldendorfs chapter on the transport of radiolabeled metabolites across the blood-brain barrier illustrates one side of this equation, whereas Poduslo's chapter on the separation of oligo­ dendroglia! cells provides new information on the role of these cells in myelogenesis and the distinctive chemical composition of glia as compared to neurons.