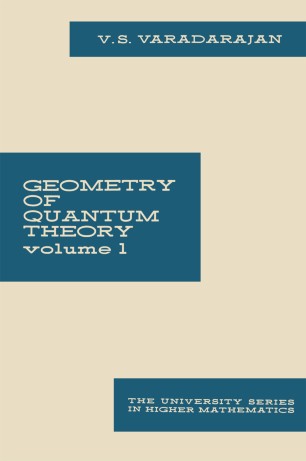 The present work is the first volume of a substantially enlarged version of the mimeographed notes of a course of lectures first given by me in the Indian Statistical Institute, Calcutta, India, during 1964-65. When it was suggested that these lectures be developed into a book, I readily agreed and took the opportunity to extend the scope of the material covered. No background in physics is in principle necessary for understand­ ing the essential ideas in this work. However, a high degree of mathematical maturity is certainly indispensable. It is safe to say that I aim at an audience composed of professional mathematicians, advanced graduate students, and, hopefully, the rapidly increasing group of mathematical physicists who are attracted to fundamental mathematical questions. Over the years, the mathematics of quantum theory has become more abstract and, consequently, simpler. Hilbert spaces have been used from the very beginning and, after Weyl and Wigner, group representations have come in conclusively. Recent discoveries seem to indicate that the role of group representations is destined for further expansion, not to speak of the impact of the theory of several complex variables and function-space analysis. But all of this pertains to the world of interacting subatomic particles; the more modest view of the microscopic world presented in this book requires somewhat less. The reader with a knowledge of abstract integration, Hilbert space theory, and topological groups will find the going easy.