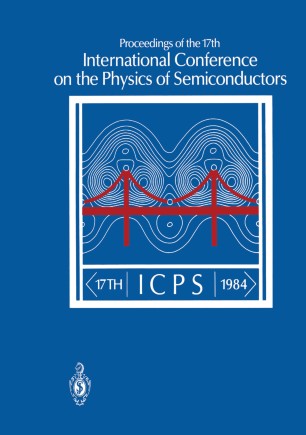 Proceedings of the 17th International Conference on the Physics of Semiconductors

The Proceedings of the 17th International Conference on the Physics of Semiconductors are contained in this volume. A record 1050 scientists from 40 countries participated in the Conference which was held in San Francisco August 6·1 0, 1984. The Conference was organized by the ICPS Committee and sponsored by the International Union of Pure and Applied Physics and other professional, government, and industrial organizations listed on the following pages. Papers representing progress in all aspects of semiconductor physics were presented. Far more abstracts (765) than could be presented in a five-day meeting were considered by the International Program Committee. A total of 350 papers, consisting of 5 plenary, 35 invited, and 310 contributed, were presented at the Conference in either oral or poster sessions. All but a few of the papers were submitted and have been included in these Proceedings. An interesting shift in subject matter, in comparison with earlier Conferences, is manifested by the large number of papers on surfaces, interfaces, and quantum wells. To facilitate the use of the Proceedings in finding closely related papers among the sometimes relatively large number of contributions within a main subject area, we chose not to arrange the papers strictly according to the Conference schedule. We have organized the book, as can be seen from the Contents, into specific subcategories and subdivisions within each major category. Plenary and invited papers have been placed together with the appropriate contributed papers.